Tonight I spent a beautiful evening with E.  When we heard the US Women's soccer team was coming into town, and they were playing Sweden!, we knew this was the perfect birthday present for her. She had to wait almost a month to actually redeem her gift, but, I think she'd say it was well worth the wait!

She had a couple of reffing jobs this afternoon, so as soon as those were over we headed out to the stadium.  I was hoping to be able to stop at a restaurant and have dinner with her before the game. Between our late start, traffic and freeway closures, we decided to get right to the stadium and eat the "delicious" food they were serving there. (gag) 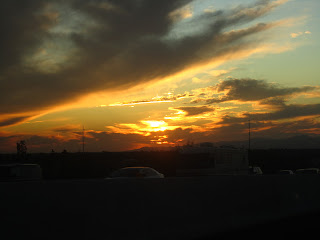 It was a beautiful evening as we set out 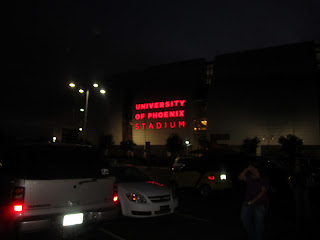 We made it!
We grabbed our food, a hot dog for each of us, a Sprite for E and water for me, and headed to our seats.  I don't really like hot dogs and I have to say that about half way through this one, I wish I had just stuck to water! LOL  Blech!

The game was so much fun to watch. E. particularly enjoyed watching #4, which is her number and plays the same position as E.  :)  Wow! She was amazing. They all were amazing. Even though Sweden ended up with the first goal of the evening, the US team seemed more in control of the game. They had so many goal attempts and just couldn't quite make it in. It was agonizing as they went to the goal over and over and it would bounce off the post, or just glance to the side, or the Swedish team would squeak in there and knock it out at the last second.

They came back in the second half with a few substitutions and finally scored in the last few minutes of the game!


The ref added 3 minutes to the playing time, and both teams fought to the very end.  At some point during the second half the crowd started chanting for Alex Morgan.  They weren't disappointed! She was subbed in and, wow! Was she fun to watch. Very talented young lady. 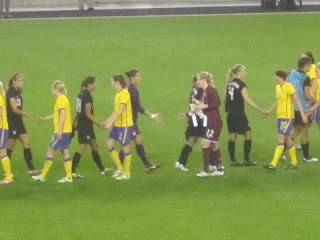 There were over 18,000 people in attendance (record crowd) so we decided to hang out a little before leaving.  We watched the players cool down, the post game interview and the coolest part, watching the players come over to the fans who were standing along the railings. One girl had a poster asking Alex for her headband, and she got it!  She was so excited!  Love to see the athletes interacting with their fans.

Love you E! Thank you for a wonderful evening!
Posted by Linda at 12:40 AM 1 comment: