Tonight was our homeschool groups art fair.  The entries were amazing.  Such a talented group.

My artists were so excited to enter again this year.  They just love art!  A. was inspired by the 2010 games and started creating her masterpiece in February, while the games were going on.  One day she asked me if I wanted to see what she'd been working on, I honestly had no idea what she had been spending all that time on back in her room.  I was amazed to see her Olympic Venues coming to life.  She has always been amazing at working in miniature, this takes the cake.  She was making a down hill ski venue, a speed skating venue w/ a figure skating venue to the side and a snowboarding venue, complete w/ snowboarder in the half pike, all out of clay and random bits of cardboard she had been collecting.  Her clay pieces are the size of a pin. They all have faces, hair and clothing.  Once she finished the main venues, she started working on the crowds.  They, too, were complete  people w/ hair, faces and clothes.  She even made little clay figures of everyone in the family.  I'm holding the baby. *grin*
Here are some pictures of A's work.  She spent many hours and much worry over whether she'd get it done in time.  I am so proud of her for her diligence and dedication.  It paid off, she got 2nd in her category and 1st for People's Choice. I have more pictures of her work simply because of the detail.  It was just amazing and you have to get in close to truly appreciate it.  It's so big, I couldn't even fit it into one picture! 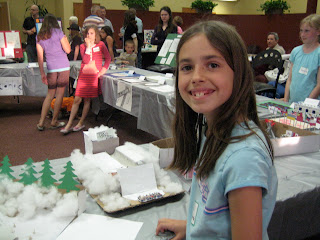 A w/ her "2010 Olympics" behind her before the judging 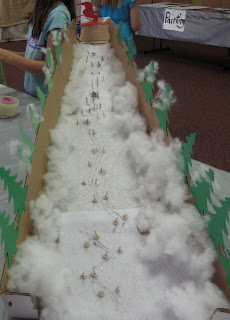 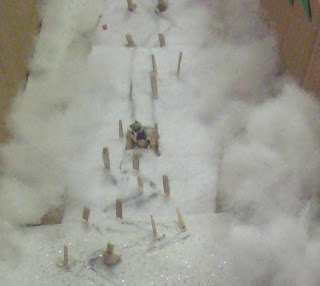 Up close of the downhill skier (the gates are toothpicks broken into teeny-tiny pieces, her snow is felt and pillow stuffing. :)  ) 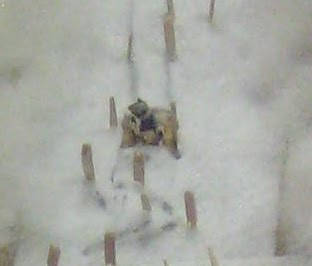 can you see the mask on the skier? 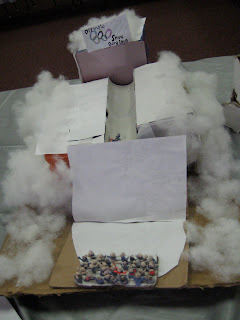 Half Pike w/ the crowd in the foreground 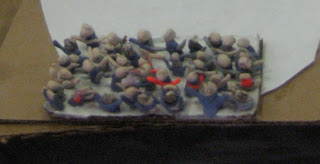 Closer view of the crowd 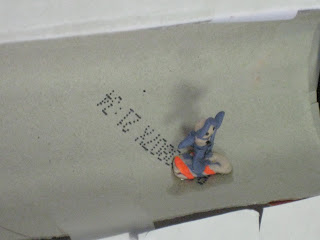 Closeup of snowboarder going through the half pike 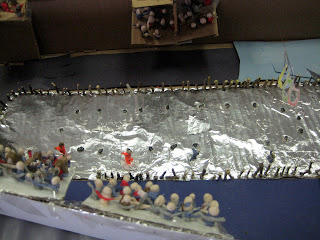 Speed skating rink, aerial shot. LOL (she used foil for the ice, broken up sticks from our old yard for the rink border and lots and lots of clay for the people)

Close up of speed skaters.  I love how one arm is back while they other is tucked in by their side. 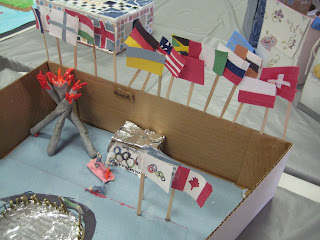 Other end of the rink w/ the flags and torch. (more toothpicks, paper and, of course, clay) 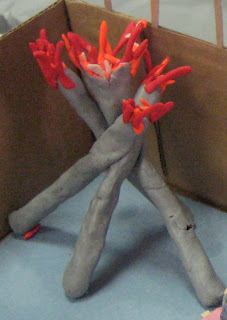 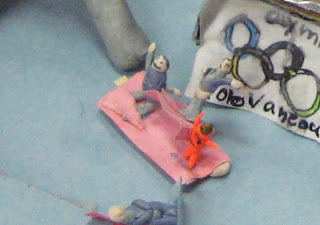 The Podium
The detail is just amazing, photos really don't do it justice.  I need to take a picture of her figure skaters.  She made a pair w/ the man holding the woman up and her hair is flowing back behind her.  I think they were my favorite out of all her clay pieces. :)
She worked so hard and created this incredible work and yet was surprised she won something, that is so very much my sweet gal.
A also entered a pencil drawing: 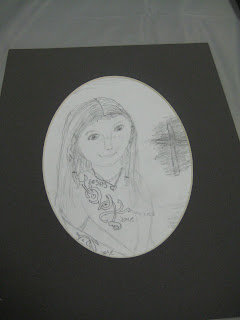 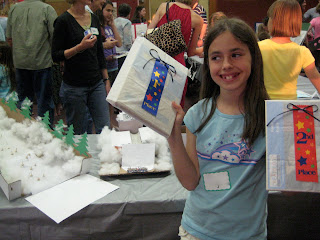 A w/ her ribbons. :)
E. is my quick draw artist.  She can produce art faster than I can think of anything to draw, paint or sculpt.  Not that I can do any of those things, I'm just sayin'. LOL  She entered a painting and a pencil drawing.  Her pencil drawing won 3rd.  She was very excited to have won. :) 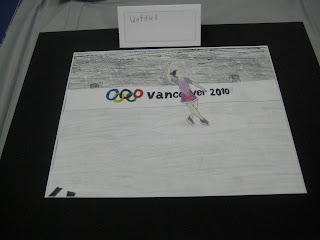 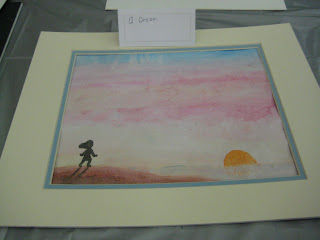 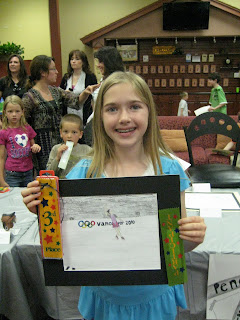 E. w/ her ribbon
R was very excited that this year her entries were going to be judged.  She entered a piece that she'd been working on for quite awhile and had finally finished. She had one entry in the Mixed Media category, same as A's, only in a younger age bracket, entitled Wall-e and Friends.  It was quite a menagerie that was finally accomplished today! Phew,  just in time. :) 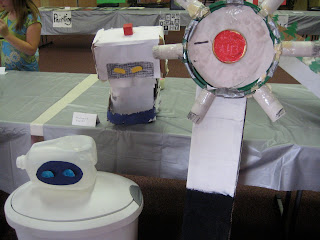 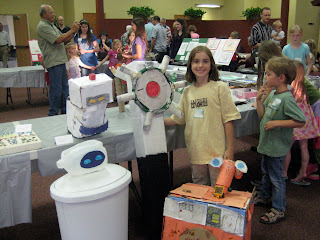 You can see part of "Auto", 'Eve (Eva), Wall-E and I don't know the other characters name LOL  Gotta ask R who that is. 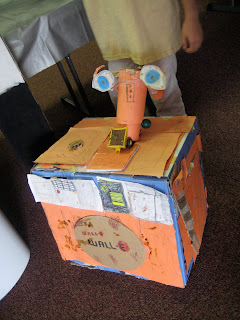 and of course, WALL-E , himself :) I don't know if you can see but on Wall-e on the left is his friend/pet Roach and in the middle is a plant for Eva. :)  I just realized I don't have a good picture of Eva.  She was the one R worked on this weekend and agonized over just what she should use for the body.  The head was made ages ago! LOL  R got first in her age category for her "Wall-e and Friends". 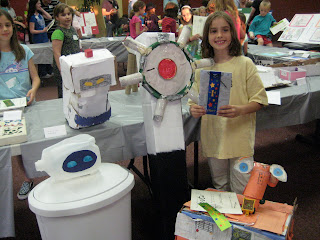 R w/ her ribbon
Both A and R used items from around the house, which I thought was pretty cool.
R. also entered a painting entitled "Before the Game".  You can tell soccer is still a major theme in our lives, even in the off season. *sigh* 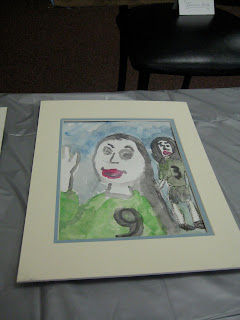 "Before the Game"
S and J (because he couldn't be left out! :) ) both entered drawings in the non-judged category.  They are both looking forward to when they are old enough to have their art in the "big kid" category. Personally, I'm not.  I like them being little. ;) 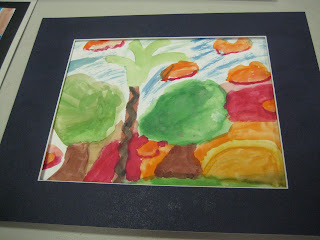 S's  watercolor "Sunrise"  I love his use of color. 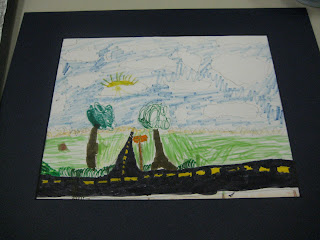 S's "The Road" I think he used markers and a little paint, but I'm not sure.  I'll have to look again at the picture. 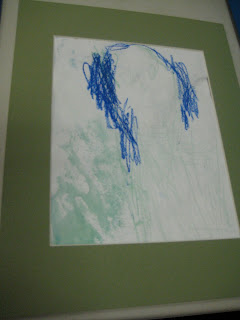 J's paint and ink masterpiece entitled "Friend"
I just love my kids creativity.  Each and every one of them.  They are such amazing kids and that's not just because they are handy w/ a paint brush.  No, they are truly amazing kids in so many ways.  I am truly blessed.
Posted by Linda at 12:16 AM 5 comments:

Go check out my friend, Marcy's blog give away.  There are four ways to enter to win these great books!


http://locustpointeacademy.blogspot.com/2010/03/my-first-blog-giveaway.html
Posted by Linda at 2:13 PM No comments: