My kids have been involved with our homeschool groups choir. Tonight they had a performance. What a fun night of praising our God through song.

Here's a video with my kids singing, How Great Thou Art. E and R sing the second verse and A and S sing the third. A friend and fellow choir member is singing the first verse. :) I don't know how to embed the video on my blog, so you'll have to click on the link to check them out. :)

We are so blessed by the gal directing our children's choir. My kids have learned a bunch and have enjoyed every minute of practice.
Posted by Linda at 12:49 AM 1 comment: Links to this post

As part of the TOS crew we had the opportunity to review Buckets - O Fun's Yuck! products.

http://www.buckets-o-fun.com/
We were given a sampler of four Yuck products:

Saucy
Along with the Yuck samplers we were given a sheet that explains just what Yuck is and included ideas for science experiments and a pamphlet with fun and creative ways to play with your Yuck.

Our samples came in small packets of dried material, about 1 tsp each, that resembled dust or beads, depending on the type of Yuck you're using.  (you can get your own free sample by clicking here, scroll towards the bottom where you'll find how to order)

Following the directions, we added the water to our sample and watched to see what would happen. All of the Yuck products began to absorb water quickly, the Chunky being the slowest. We tried out some of the suggested experiments measuring the amount of product we began with and comparing to how much product we ended with, charting to see how long it takes for the product to absorb water and which product absorbed the most water.  Most of the experiments are observational type so students of all ages can participate!
After our products were done absorbing all the water (each one had a different absorption rate), the real fun began!  We invited our neighbors over so they too could enjoy playing with Yuck.  I let them look through all the game suggestions and they decided to ditch those and go for the one they all liked, a Yuck fight! LOL  Oh my, the Yuck was flying.  Good thing I had already planned on doing this outside and it was a beautiful day!

E. demonstrating some Sticky Yuck, while A. is getting ready to throw some Chunky Yuck

Saucy Yuck has the consistency of applesauce
We had boys and girls, ages 7-12 having so much fun digging into their buckets of Yuck and flinging it at each other. It didn't take long for everyone to be covered in a soupy, sticky, gloppy mess nor for all of them to have huge smiles on their faces!  After the flinging was over, which only happened when the product was completely gone, I got out the hose and hosed them all down, over and over and over and over!  This stuff is water soluble so it doesn't just "wash off".  After the hose, I got out some vinegar and let them wipe it off their skin and rinse their hair. They all changed clothes and we set the clothes out to dry. Once they were dry, I shook them out and then threw them into the washing machine.  Make sure you follow the instructions closely on the packaging for how to take care of Yuck if it does get on your clothing. You definitely do not want to just wash this product down the drain. Knowing I didn't want to hassle with cleaning any of my own bowls without using my drain, I mixed my samples in disposable buckets, which made clean up a breeze. :)

S. demonstrating just how sticky Sticky Yuck is. His fingers were sticking together!

The chunks in the grass that look like ice cubes are really, Chunky Yuck.  A's. non-bandaged foot is also stepping on some Sticky Yuck but it doesn't show up very well in this picture.
By the looks on all the kids faces, it was apparent that Yuck was a huge success and should I be needing a fun, albeit messy, game for a group get together, I will definitely keep Yuck in mind.
Click here for some video's describing Yuck and showing how to mix up some Sticky Yuck and various ways it can be used (if you don't want to just throw it at each other that is ;) ).
So, what do you get when you buy some Yuck? First, you choose what type you'd like to purchase. They come in 1, 5 and 50 pound packages and they make gallons of Yuck product once you hydrate them! That's a whole lot of fun. :)   The prices start at $16 and go up from there depending on your Yuck product and amount you purchase.  You can find all the pricing and ordering info on their very easy to navigate website.  While you're there, make sure you check out the accessories that  go along with their Yuck slime.
Besides Yuck products, Buckets - O Fun has a bunch of other fun games that are sure to put smiles on everyone's faces! From Finger Rockets to Water Fun toys, you will be sure to find something that puts a smile on your face. Make sure to check out their website for all of their fun games.

To see what other TOS Crew members thought of Yuck, click here.
I received this product free for the purpose of reviewing it.  I received no other compensation for this review.  The opinions expressed in this review are my personal, honest opinions.
Posted by Linda at 11:37 PM 1 comment: Links to this post

As part of the TOS Crew I had the opportunity to review Talking Finger's, Read, Write & Type! Learning System .

My kids really enjoyed the animations and the program completely engaged them. The animations tell the student what to do and the student does it.    The characters involved are Lefty LaDee, Rightway McKay and the villain, Vexor the Virus.  Vexor has stolen all the letters on the keyboard (each letter is also represented by a character, whose name begins with that letter sound) and it is the students job to get those letters back. Lefty and Rightway are the helping hands that guide the student through the various exercises where they can rescue the letters from Vexor. Once a letter has been rescued, the letter lights up on the keyboard and the individual characters are shown. 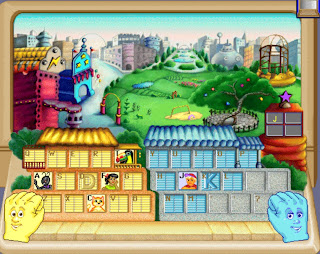 Lefty, Rightway, the town and several rescued letters on the keyboard

Rightway showing how to type "J"
To rescue the letters the student must go through several exercises which involve determining whether the letter sound they are looking for is in the beginning, middle or end of the word. This helps strengthen phonemic awareness. 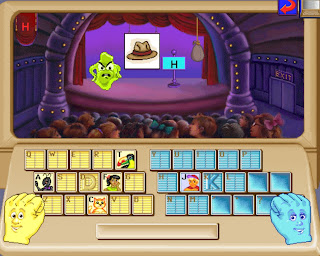 Trying to rescue the letter H from Vexor. The student would type "H" for hat. If the picture shown starts with another letter, the student types the space bar.
Once the student rescues the letter from Vexor the next step is to type a series of letters or words that helps the character across a playground, lake, garden, etc. 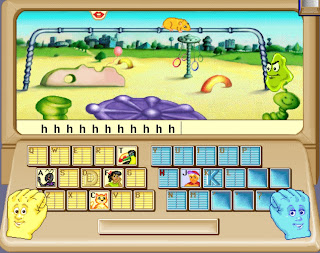 Once they have successfully typed the words the character makes it to the Story Telling Tree where the student types a four sentence story that that character makes up.  After all that is done successfully, then, the letter has completely escaped and is "free" and is now back on the keyboard. 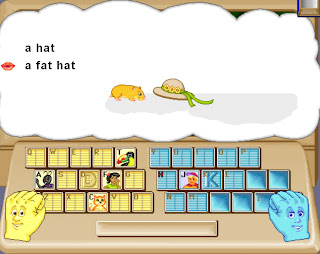 There is also a section that is unlocked after a few levels where the student can write and send as well as  receive stories by other students through a simulated email program.

What happens if you aren't successful? Vexor sends you back to the beginning to start on that letter sound all over again.

After four successful rescues the student has completed a level. They are taken to a new screen where they can print out a certificate showing completion of each level. There are 10 levels in all.

There is also an assessment area where after each level of completion, Vexor comes on the screen in his spaceship and says he wants to play. The student is then taken to another screen where they are tested on phonics, reading and spelling for the sounds they have learned. This is done through a series of drills similar to the exercises they already completed during the rescues. The teacher can track students progress and print out reports showing a bar graph of each individual students progress.

That is a basic rundown of the program. It's a typing lesson, reading lesson and writing lesson all wrapped up into a game that includes fun animated characters and sounds (I personally found them annoying, but my kids loved them ;) ).  You can watch a short video (3 min.) explaining more about this program here.


There were a few things about the program that could be a problem and was in fact for us. :)  The instructions aren't always clear and the commands are given fast. For a beginning reader, which I have, this gets frustrating. I also found the word usage was more advanced than what a beginning reader would typically be expected to know how to spell. My son did okay on most of the lessons but he did struggle with the spelling portion.  Another problem I had was the program would freeze during assessments. On several different assessments my son would complete the task but the program would not move on. We would need to refresh the page which brought us back to the opening sequence. All the work that had been done during the assessment was lost requiring it all to be redone. After 3 or 4 times, my son gave up in frustration and would stop and come back later to give it another try.  Other than those few minor issues, my kids really enjoyed this product.

Read Write & Type costs $35.00 for one user, $55.00 for 2 users, $70 for 3 users, $85 for 4 users, or $100 for 5 users for a home license with a 5 year subscription. School licenses last one year and are priced differently. CD bundles are also available, and for larger families may be a more budget-minded option. Additional downloads, including Activity Books, Reading Books and a practice paper keyboard are available for online subscribers via the website.
Talking Fingers carries other educational products such as Wordy Qwerty, which is the next step up from Read, Write and Type! and Jingle Spells which puts spelling rules to music! These are just a few of their products, you can check out more of what Talking Fingers has to offer by going to their website.

To check out what others had to say on the TOS crew, click here.

I received this product free for the purpose of reviewing it.  I received no other compensation for this review.  The opinions expressed in this review are my personal, honest opinions.
Posted by Linda at 10:50 PM 2 comments: Links to this post